Camp Lejeune is a United States Marine Corps Base Camp in Jacksonville, North Carolina, that is now known to be the site of an environmental and public health disaster.

For over three decades, beginning in the 1950s, chemicals from leaking underground storage tanks, industrial area spills, improper waste disposal, and a nearby dry cleaner contaminated the drinking water at Camp Lejeune with toxic chemicals.

Anyone who served, lived, or worked at Camp Lejeune between 1953-1987 may have been exposed to dangerous chemicals linked to serious illnesses such as cancer.

On August 2nd, 2022, the PACT Act passed Congress, granting veterans and their families the right to seek justice for health conditions caused by toxic water contamination at Camp Lejeune.

At BMBFC, we have an experienced environmental litigation team with a proven track record of achieving justice for families and communities ravaged by the health impacts of toxic contamination. We are here to listen, guide, and lead clients through these cases, never losing sight of the benefit we are hired to achieve.

In the early 1980s, multiple sources of drinking water at Camp Lejeune were found to contain cancer-causing chemicals. However, according to organizations like the Agency for Toxic Substances and Disease Registry, the contamination started decades earlier, in the early 1950s.

There have been allegations that the government knew about the contamination for decades but failed to take action to protect the community.

According to the Centers for Disease Control and Prevention, those volatile organic compounds, or VOCs, were found in the water far exceeding the maximum “safe” level.

It is well established that frequent or large exposures to pollutant VOCs in drinking water are linked to several serious health conditions, including cancer, neurological damage, and other illnesses.

People who were exposed to contaminated water during their time serving or living at Camp Lejeune may have developed:

In the past, the Veterans Administration denied many claims from those who may have been harmed by exposure to the contaminated water at Camp Lejeune. When reviewing claims, the VA may have used physicians who were not specialists and had minimal background on issues stemming from Camp Lejeune to evaluate these claims.

Victims have also been denied justice because of a North Carolina law that prevented toxic contamination victims from bringing a lawsuit more than 10 years after pollution takes place.

After years of suffering because of this stunning environmental contamination, there is now hope in sight for Camp Lejeune victims. In 2021, a group of dedicated citizens helped to introduce the Camp Lejeune Justice Act to Congress.

The legislation proposed eliminating the legal barriers that Marine veterans and their families face from the uniquely unfair application of the North Carolina statute in federal courts.

The bipartisan Camp Lejeune Justice Act of 2022 was rolled into the PACT Act, which was passed by Congress on August 2nd, 2022.

The passage of this bill now allows service members and their families to seek justice by removing barriers that have stopped those harmed from filing claims. 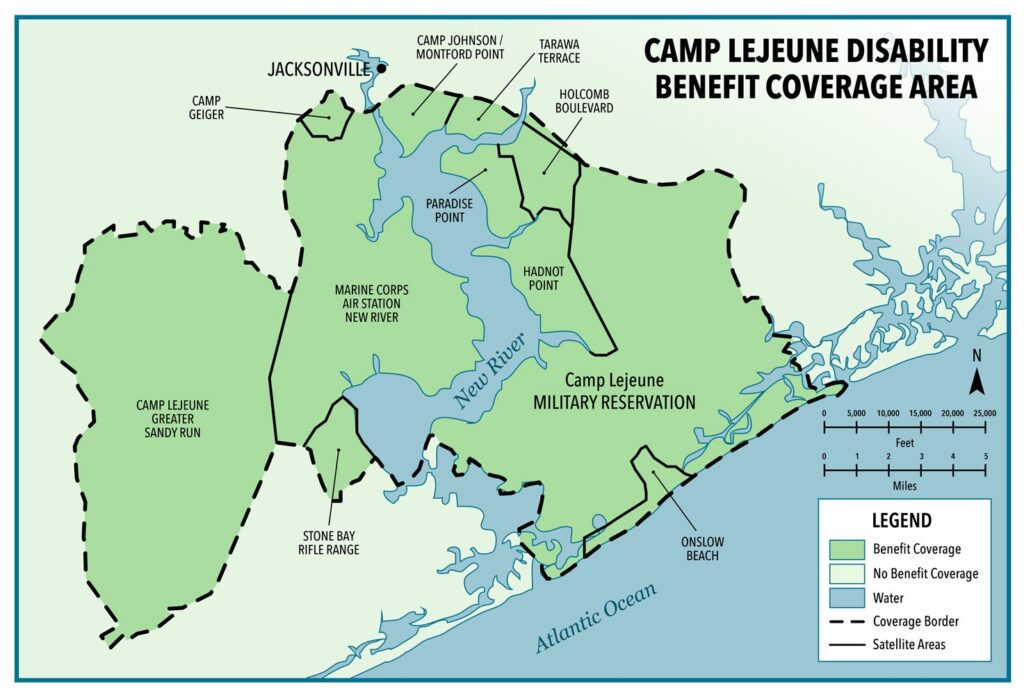 At BMBFC, we are focused on achieving justice on behalf of veterans and their families who were harmed while serving our country, and we are proud to offer the direct personal attention of our attorneys with a highly individualized focus on your matters.

What sets us apart is a team of lawyers with significant experience fighting for communities that have been ravaged by water contamination. Our environmental law attorneys – comprised of experts in the environment, water, engineering, and health fields – has gotten justice for families and communities who live every day with the health impacts of toxic contamination.

Our focus on a core group of practice areas has allowed us to develop considerable expertise in our fields and the ability to offer our clients an intense and highly individualized focus on their matters.

Our clients receive the direct personal attention of our environmental law attorneys, and we pride ourselves on our responsiveness and accessibility.

How to Seek Justice

If you or someone you know lived or worked at Camp Lejeune for at least 30 days between 1953-1987 and would like to contact our experienced team of environmental law lawyers to help you with a free case evaluation, please complete the form below.